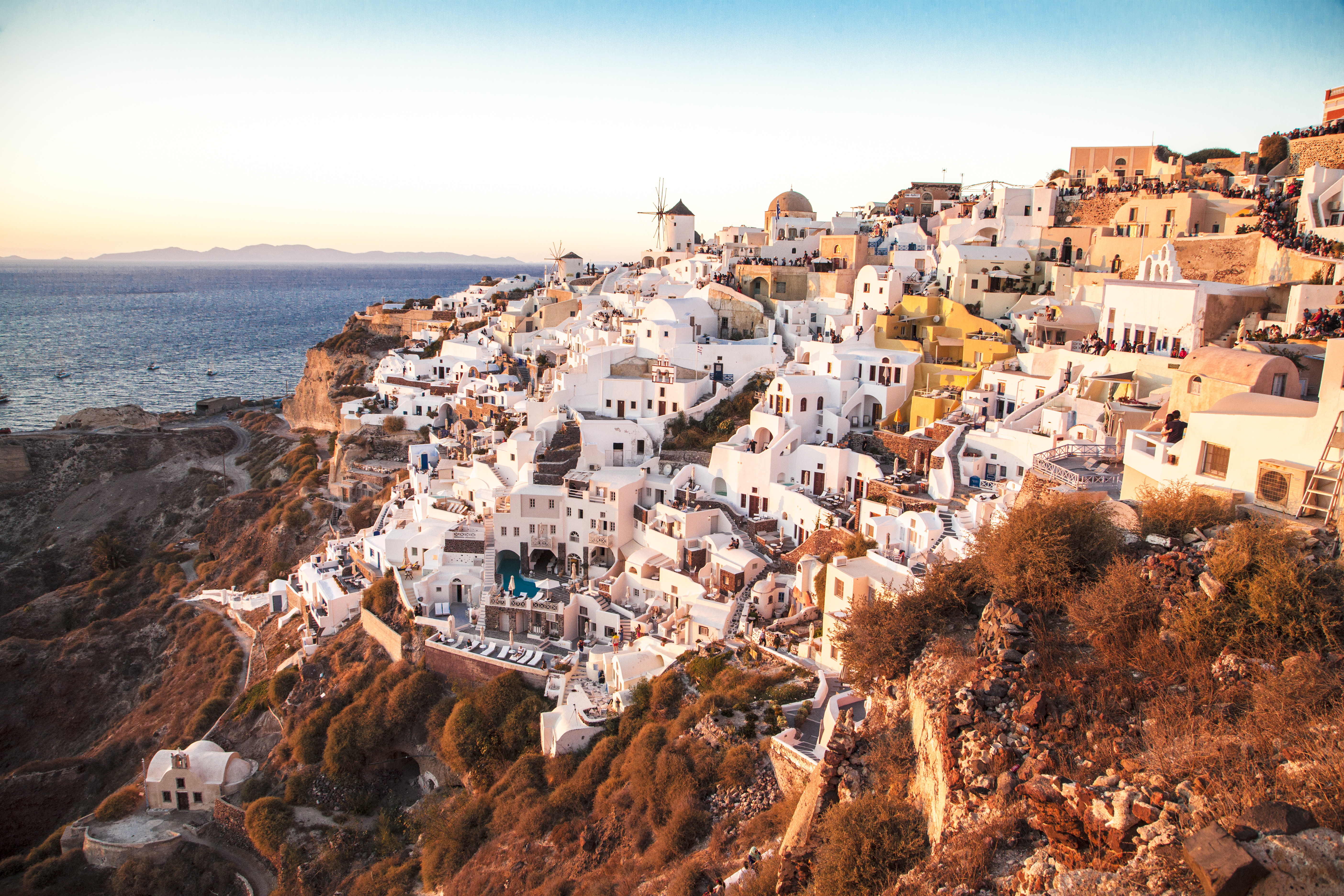 WHAT TO DO IN SANTORINI

If you’ve ever looked at pictures of Greece, some of the most iconic images are of Santorini. And going there, I was not disappointed. Everywhere I looked, there were amazing views. While my husband and I went in early October, it was still very crowded with tourists. The streets are very small and there is one main small street that goes through the city and shops, so I can’t even imagine how crowded it would be had we gone in the on-season months. 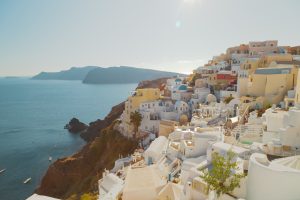 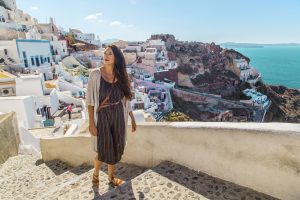 There are a few towns on the island of Santorini, but if you want to be where all the spectacular photos are taken, you want to stay in Oia (pronounced Eeya.) It will be more expensive than the other towns though, such as Thira. In my opinion, it was well worth it.

We flew into Athens, took a small plane to Mykonos, and from there (or any other island,) the main way to get to Santorini is by a large water taxi.  From there you can either take a taxi or rent a car. When we got off the boat, we arrived to about 10 different rental car booths, with very eager men waiting to help us. At first I was skeptical because of the hard sell, but it actually ended up being a really great deal. We rented a car for €30 a day and were able to leave it at the airport when we were leaving to go back home.  The taxi alone would have been at least that if not more, since it’s about a 20 minutes drive to get to the other end of the island. Parking is free most everywhere in Santorini. There are a few places that charge a few dollars but it’s a scam for travelers who do not know that there is free parking lots all over. 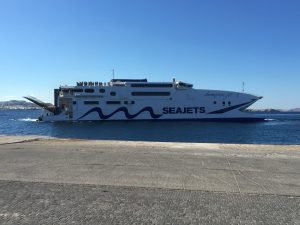 Also, there were no street signs the closer we got in to the towns, so be aware of that going into it. Just either pull up your GPS or if you don’t have it, take a deep breath, be okay with having to look around, and ask the locals for help. Make sure to grab a map when you first arrive from the rental company or taxi.

We were lucky enough to run into this very nice couple when we first got into Santorini who had already been there for a few days. The one thing they told us is that the sunsets are legendary and there is a sunset look out spot in Oia that everyone goes to. Which means that you have to be there at least 2 hours early to get a good spot. I know this sounds kind of crazy but it was really fun.

My husband and I got in about noon, had some lunch, checked into our hotel, and decided that it made sense to do the sunset wait the first day since we didn’t have the full day anyways..  I would suggest grabbing a bottle of wine, a snack, your camera, and a jacket and setting up at the lookout spot since you will be there for a bit. Don’t be surprised if it eventually becomes very crowded with people. You can also get a table at one of the restaurants overlooking the sunset, but the view will not be as good as the lookout tower, and you still have to go at least two hours before to get a table. The best part isn’t really the sunset, it’s the colors that are cast over the white buildings as the sun hits them. (see below) 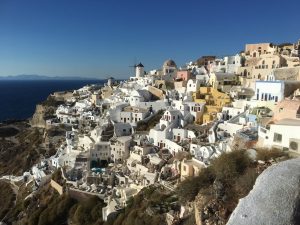 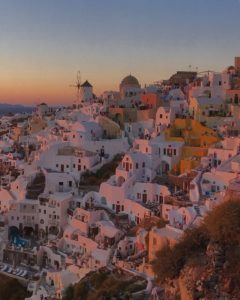 If you’re able to wake up early, you may also catch a double dose of awesome, because the sunrises are just as beautiful! I did this by using my jet lag in the best way I could. I accidentally fell asleep at 6pm the first night I was there, so ended up waking up before the sunrise. This got me on a good rhythm the rest of the trip, so as long as I went to bed before 10pm (since I’m not a big nightlife person anyways, and found myself exhausted from walking around everywhere) I could wake up early enough if I wanted to catch the sunrises. From now on, I will do it everywhere I travel! And in Santorini, that’s the best way to get pictures of those iconic locations without anyone else in your shot. 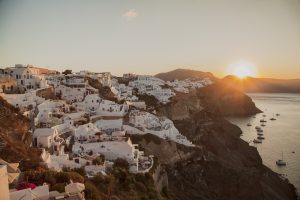 Me being a chef and my husband being a huge foodie, we may be a little picky when it comes to food, but we were not disappointed at all with the food in Santorini. We even had some of the best meals of our lives there.  Whether it was €2 gyros or €100 meals, it was absolutely delicious. Honestly, I wouldn’t spend too much time or money worrying about restaurants. They are constantly competing for business, so their food is always top notch.

The bottom left and center image are from a restaurant in Oia called, Thalassia.  The pasta was an ouzo pasta. I personally don’t like drinking ouzo because it has a black licorice taste, but the waiter told me that it has a very different taste when cooked. So, the chef in me had to try it! And wow was it different, and so delicious! The middle image is a Greek Mille-feuille dessert. It was so unique and just the right amount of sweetness for me, which is not too sweet. The right photo is 2€ gyros that I got at a stand right outside before walking to The Red Beach and it was amazing, especially for the price! 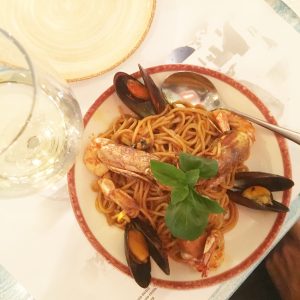 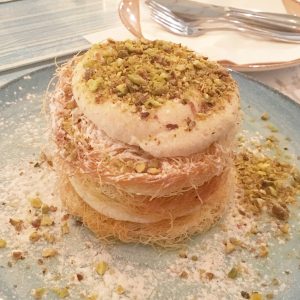 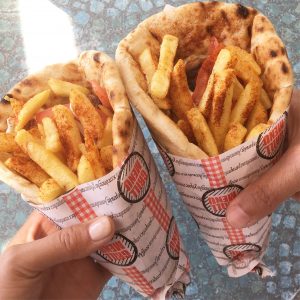 The bottom right photo, doesn’t look like the most appealing meal, but it was one of the best meals I have had in my lifetime! And that is saying a lot. I had it at the restaurant, Lotza. I forget the exact name of the dish but it was a mussel dish with rice and peppers. Apparently, it is a family recipe that has been at that restaurant since they started. The left photo was a lamb dish also from Lotza, which was also amazing! 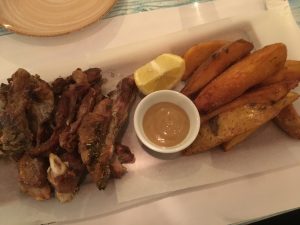 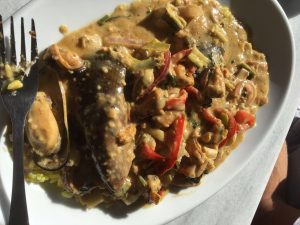 If you’re a coffee lover like I am, you have to try the Greek coffees. They’re very strong, but so delicious! I may have needed them from my sunrise photo adventures lol. If you’re in Oia, there was the cutest coffee shop/bar, called meteor cafe (shown below) with the best views and coffee! If you’re not a coffee person, you can still go there and get a beer or wine. 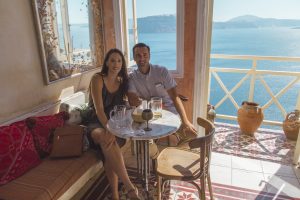 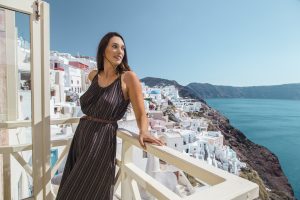 You definitely should take a half day and go on a wine tour if you are a wine lover. Santorini is a volcanic island, which makes the produce there very flavorful and delicious…including the grapes! Also, an extra bonus is that the wine is very inexpensive. The most amount of money I spent on a bottle of wine was 8 euros or about 10 dollars (not including restaurants.) Knowing what I know now, I wish I would have put a little more time aside to go visit a couple of the wineries.

There are 3 most popular beaches; The Red Beach, The White Beach, and The Black Beach. You can guess by their names that this is because of the color of their sands. 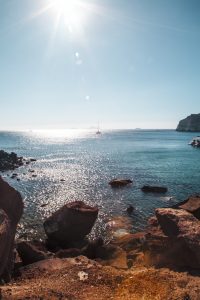 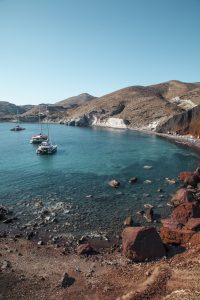 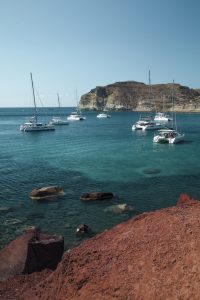 My husband and I only had time to go to one, so we picked the Red Beach based on images that we had seen, and how beautiful it looked. You can pay for a boat that will take you to all 3 but it’s pretty expensive, or there are small water taxis that will take you to the others once you get to one of the beaches. We had a car, so it made it easy for us to save the money and just drive to one of the beaches. It was about a 40 minute drive from Oia, as the beaches are on the opposite side of the island.  But again, there is free parking right near by. There is a short walk through some rocks to get to the beach, but it wasn’t anything that would deter you from going.

If you plan on spending more of your time in the water, then you may want to look at hotels near the beaches. And surprisingly, the water was still warm enough to swim in early October, so going then or late September is the perfect time to go! Still great weather but without the massive crowds.

Now I’m on to Italy where I will be stopping in Venice, Florence, and Milan! Look out for those posts, and leave a comment, travel tips, or any questions below.